What Is Steampunk Style? 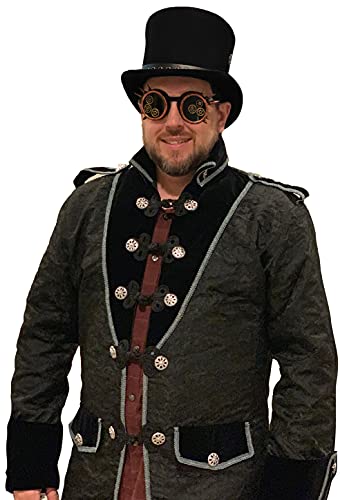 Steampunk is a subgenre of science fiction that typically features steam-powered machinery, especially in a setting where society has reverted to an earlier era. In this post, we will talk about what is Steampunk style and how it is used in the art.

While there are many different interpretations of what steampunk style is, some general characteristics are usually associated with the genre.

In this blog post, we will take a look at some of the most common features of steampunk design, as well as explore its origins and how you can get the look for yourself!

What kind of clothes are usually worn in a steampunk style?

The most common type of clothing associated with steampunk is Victorian-inspired fashion.

This means lots of corsets, top hats, and waistcoats for ladies; and suits, suspenders, and bow ties for gentlemen.

Of course, you don’t have to stick to traditional gender roles when it comes to your steampunk clothing.

You can mix and match different elements to create a look that is unique to you.

Another popular choice for steampunk clothing is military-inspired fashion.

This can include anything from jackets and trousers to full-on uniforms.

What are the most common features of a steampunk design?

There are many different features that can be found in a steampunk design, but some of the most common ones include:

These elements are often used to create a feeling of nostalgia or anachronism.

Gears, for example, are a common steampunk motif because they evoke the image of a bygone era when machines were powered by steam.

How you incorporate these elements into your own steampunk style is up to you.

You can go for a more subtle look with just a few brass details, or go all out with an elaborate costume that is covered in gears and steam pipes.

What are the origins of the Steampunk style?

Steampunk style first became popular in the 1980s, when it was used as a way to describe certain works of science fiction that were set in the Victorian era.

However, the term “steampunk” was not actually coined until 1987.

It was first used in a letter to the editor of Locus magazine, in which author K.W. Jeter described his own work as “steampunk.”

Since then, steampunk has become a widely-used term to describe anything that is inspired by the Victorian era and features steam-powered machinery.

How do I make a steampunk outfit?

If you’re interested in creating your own steampunk outfit, there are a few things you’ll need to consider.

First, decide which elements of steampunk style you want to incorporate into your look.

Do you want to go for a more subtle approach, or do you want your outfit to be covered in gears and steam pipes?

Once you’ve decided on the overall look you’re going for, start putting together your outfit piece by piece.

For a ladies’ steampunk outfit, you might want to consider a corset, a skirt, and a pair of lace-up boots.

For gentlemen, suspenders, trousers, and a button-down shirt are a good place to start.

And don’t forget to pick the right hat and Steampunk goggles that go with your outfit.

Of course, there are no hard and fast rules when it comes to steampunk fashion, so feel free to experiment and have fun with it!

What are some of the most popular steampunk fashion brands?

There are many different fashion brands that cater to the steampunk aesthetic.

Some of the most popular ones include:

These brands offer a wide range of steampunk-inspired clothing, from Victorian-style dresses to military-inspired uniforms.

If you’re looking for a good place to start your steampunk wardrobe, check out one of these brands!

Who are some popular figures in the steampunk movement?

There are many different people who have been instrumental in promoting the steampunk aesthetic.

Some of the most popular figures include:

These authors have all written steampunk novels that have helped to popularize the genre.

In addition, they have also each created their own unique take on the steampunk aesthetic, which has inspired many people to experiment with the style.

What is a good example of a steampunk outfit?

A good example of a steampunk outfit would be a corset, a skirt, and a pair of lace-up boots for ladies, or suspenders, trousers, and a button-down shirt for gentlemen.

Of course, there are many different ways to incorporate steampunk style into your outfit, so feel free to experiment and have fun with it!

Why is steampunk style so appealing to people?

Steampunk style is often appealing to people because it evokes a feeling of nostalgia or anachronism.

Gears, for example, are a common steampunk motif because they evoke the image of a bygone era when machines were powered by steam.

How you incorporate these elements into your own steampunk style is up to you.

You can go for a more subtle look with just a few brass details, or you can go all out with an elaborate costume that is covered in gears and steam pipes.

Either way, steampunk style is a fun and unique way to express your individuality! Thanks for reading! I hope this has helped answer some of your questions about the Steampunk style.